Definition as a locus of points

A parabola can also be defined as a set of points, in a plane, such that any point P in the set are equidistant between a fixed point F (focus) and a line l (directrix). The focus is a point located on the line of the axis of symmetry, while the directrix is a line perpendicular to the axis of symmetry. Sets for all the points on a parabola can be described by the equidistant property inside curly braces.

Drag the point P so that it moves along the curve of the parabola. It shows wherever P moves on the parabola, the distance between point F and point F is always equal to that to the line l.

The midpoint V of the perpendicular from the focus F onto the directrix l is called vertex, and the line FV is the axis of symmetry of the parabola.

Since the plane which intersects the cone is parallel to the generating line of the coen, a parabola is always unbounded U-shaped curve, which either opens upwards, downwards or in other different directions.

To simplify the process, let's start from the case when a parabola opens upwards, vertical parabola. The equation of the parabola Cartesian coordinate system can be expressed in the form of quadratic equation.

Transform the equation (1) to get the vertex form of the quadratic equation.

Then the coordinate for the vertex of the parabola is otained as below,

However, when it comes to study the properties of a parabola, the following equation is quite poular.

h is x-coordinate of the vertex V

k is y-coordinate of the vertex V

Comparing the equation (1) and (4) could determine the length of focal distance of a parabola given in the form of a quadratic equation.

Expand the equation (4) to its quadratic form,

Compare the above equation with (1), we get the focal length p in terms of a.

From the coordinates of vertex V (5), it's obvious h and k can be expressed in terms of a, b,c.

In the figure, since the latus rectum CD is parallel to the axis x, the length of CD is the difference of x-coordinates of point C and point D.

Substitute the y-coordinate of the focus k+p into (5).

Solve the equation using the roots formula for quadratic equation. 2 solutions are obtained.

Horizontal Parabola - Rotating from Vertical One

Substituting u and v into equation (10) gives general formula for a parabola after rotating an angle of θ.

If θ=90\degree, the equation is simplified as

After rotation about the Origin, the focus is transformed to the position F' with a new coordinate (k+p,-h). The sign of y-coordinate of the focus F' becomes negative since the point falls into quadrant Ⅳ.

Why is the conic section parabola

Let’s come to first question: why does intersecting a right circular cone with a plane produces a parabola when the plane is at an angle that is parallel to one of the elements of the cone.

Let \beta denote the plane that contains the intersecting circle, then

Next, let's use a plane denoted as \alpha to intersect the cone at an angle that is parallel to the line SG and tangent to the sphere at point A. The section produced by the cone and plane \alpha is a parabola and the tangent point A is considered as the focus of the parabola. Intersecting line of plane \alpha and \beta l is considered the directrix of the parabola. To verify the statement, we are going to show the definition of a parabola is true for the conic section.

Since the plane \alpha is parallel to SG, we observed

This statement could be separately proved. Since the intersection points of the plane with the base M and P are a pair of symmetrical points. \triangle AMP is an isosceles triangle.

On the other hand,

Since MP is perpendicular to two intersecting lines GH and AO in the \text{plane}\, SGH,

l is perpendicular to any line on \text{plane}\, SGH, including the intersection with plane \alpha OJ.

Since the Quadrilateral DGOJ is a parallelogram, opposite sides are equal.

Now let's look at the Dandelin Sphere. Since point PC and PA are both tangent to the sphere, they have equal length.

Considering the statement (17), d is perpendicular to l.

Since there's no constraint about the height of the cone, the point P on the section is arbitrary, which shows that for any point P in the intersection, it is equidistant between a fixed point A (focus) and a line l(directrix). 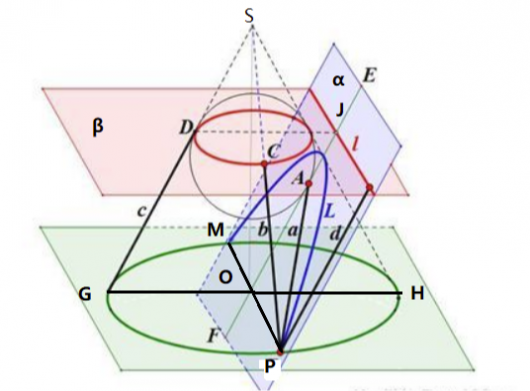 Collected in the board: Conic sections